USDA’s
largest surprise today was likely in US soybean oil stocks.  USDA reported 720,000 tons of soybeans were sold to China.  USDA due out later.   China S&D’s unchanged for 2020-21.  USD is higher and WTI crude sharply lower.  US Dow futures are down nearly 900
points.  The US Fed estimates a three-year recovery in GDP.

Bearish
soybean oil and wheat.  Bull spreading corn justified with change in 2019-20 and 2020-21 US ending stocks. 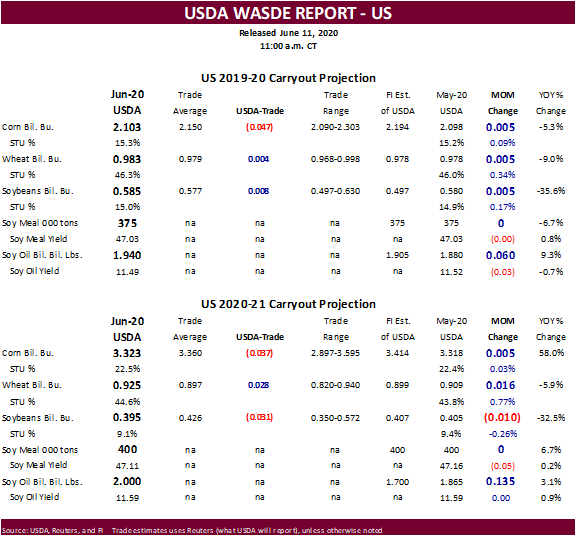 <![if !supportLists]>·
<![endif]>US 2019-20 corn ending stocks came in 47 million bushels below trade expectations at 2.103 billion, 5 million above the previous month, promoting bull spreading. This is because new-crop US corn stocks of 3.323 billion ended up
37 million bushels below an average trade guess.  US corn for ethanol for 2019-20 was

<![if !supportLists]>·
<![endif]>US soybean stocks for 2019-20 were near expectations and new-crop were reported 31 million below the trade guess. USDA lowered 2019-20 US soybean exports by 25 million to reflect higher Brazilian exports.

<![if !supportLists]>·
<![endif]>New-crop world wheat stocks increased 6.0MMT to 310 million, 6.8 percent higher than end of 2019-20.  India’s wheat production was upward revised a large 4.2 million tons to 107.2 million tons, and if the government provides an
incentive for exporters, India could easily contribute to the world trade.

MARKET
WEATHER MENTALITY FOR CORN AND SOYBEANS:  Once remnants of Tropical Depression Cristobal leave the Corn Belt, net drying is expected for a while. Soil moisture will be favorable for good crop development in most areas, although slowly declining soil
moisture in the eastern Midwest, the far southwestern Corn Belt and parts of the Tennessee River Basin will be closely monitored. Timely rain will be very important for all of these areas late this month and in July.

Canada’s Prairies are too wet in the west and a little too dry in parts of the south-central and east.  Some canola and other late season planting has stopped in the wetter areas of Alberta and those fields may be abandoned because of too much moisture and
the lateness of the season. Rain in the eastern Prairies late this weekend into early next week may offer some relief.

South America weather remains mostly good for maturing crops and their harvest. Dryness in some eastern and northern Safrinha crops may have harmed late season yields. Argentina’s harvesting will continue aggressively, although rain in the east will induce
some disruption.

Rain is needed in South Africa and Australia to improve canola planting conditions. Some rain is expected in Australia beginning in the west today and reaching the east Friday into Saturday.

Philippines rainfall is being boost by a tropical disturbance with additional dryness relief expected in Luzon Island over the next few days.

Most
of Malaysia and Indonesia rainfall is still rated favorably and likely to prevail for a while.

Europe weather will remain mostly good for coarse grain and oilseed development, although some additional warming is needed in Eastern Europe and a boost in rain is still needed in France, parts of the U.K. and Germany. Some of that needed rain is coming.

Overall, weather today will likely have a mixed influence on market mentality.

MARKET
WEATHER MENTALITY FOR WHEAT:  Too
much rain recently in Alberta, Canada has raised concern over small grain conditions and additional rain slated for the next several days will induce some additional concern and crop damage. Eastern parts of the Prairies may get some needed rain late this
weekend into early next week, but many areas will be looking for greater rain.

U.S. hard red winter wheat is finishing out relatively well, but dryness and frost damage in the southwestern Plains has left production low in some areas. Rain in Nebraska, parts of Kansas and a few Colorado locations earlier this week benefited late season
crop development.

Rain in Europe has improved small grain conditions in recent weeks, although there is need for more rain in France, the U.K. and parts of Germany. Eastern Europe would benefit from some warmer temperatures.  Spring cereals are still rated favorably in many
areas outside of northwestern Europe with little change expected through the coming week. There will be some interest in eastern Russia’s spring wheat as time moves along this summer, but for now the environment is still mostly good. Net drying in central
and eastern Ukraine will raise some concern over small grain crop conditions later this month, but conditions today are still good. 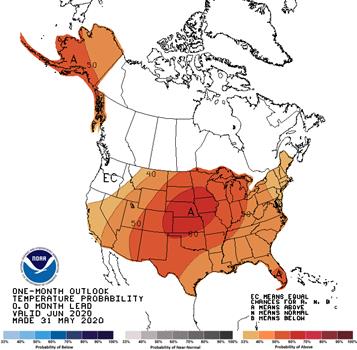 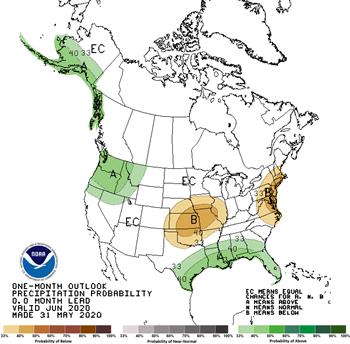 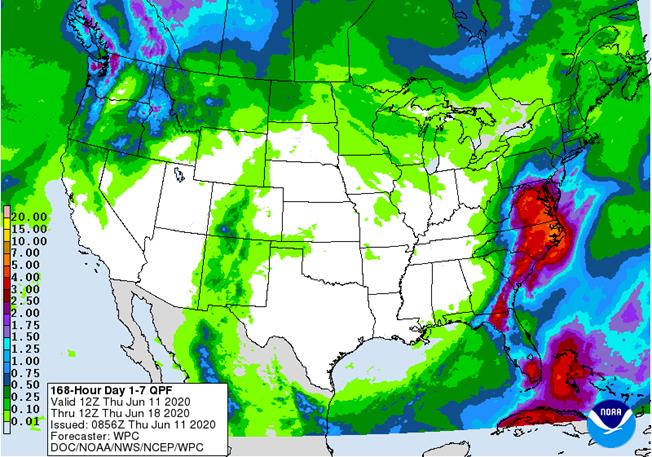 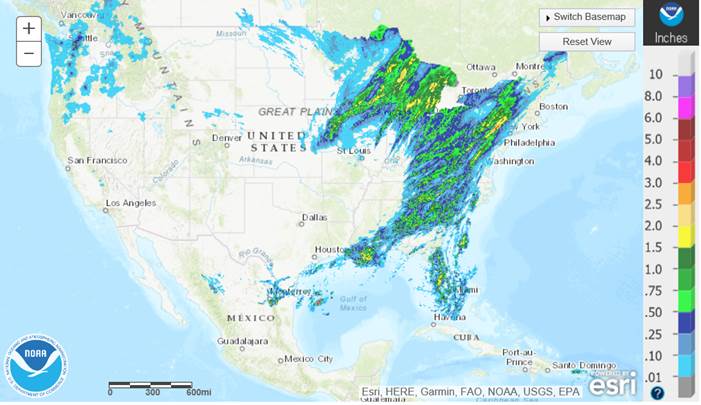 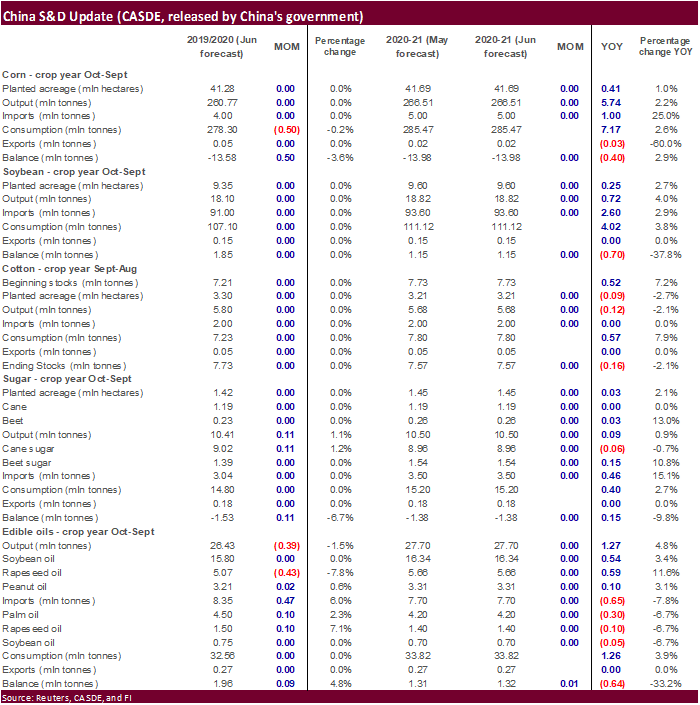 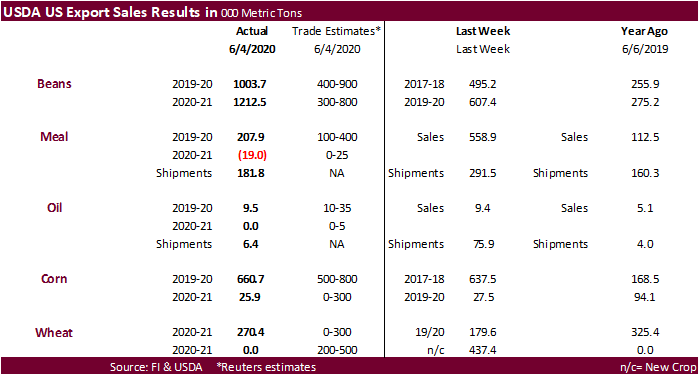