US
balances for the soybean complex attached. We did not make any major changes to FI’s balances other than update crush stats and trade data for April.  Reflects USDA update for June. Note we will be revising our SBO price projection next week after revising
production for corn, soybeans, and wheat.

It
was a busy day with reports.  Grain and oilseeds were choppy and mostly higher pre-USDA report.  Prices immediately rocketed higher for corn but soybeans traded sharply lower, taking wheat down with them, post report.  Remainder of the session prices traded
choppy, with many contracts fluctuating up and down.

USDA
export sales were largely within expectations. Conab reported a higher-than-expected corn production estimate for Brazil at 96.4 million tons but that is down 10 million from their previous estimate, a large reduction.  Brazil soybeans at 136 million tons
were up 0.5 million tons from the previous month and 1 million below expectations.  Malaysian palm oil end of May stocks were less than expected at 1.569 million tons (1.64MMT est.) despite a lower-than-expected palm export figure.  China in its CASDE report
lowered domestic feed and food use.

Reaction:
Bullish
corn, neutral wheat and bearish to neutral soybeans.  Look for the trade to quickly shift focus on crop conditions, weather, and June
Acreage report due out at the end of the month.

Next
major report is June Acreage, followed by the July S&D.  USDA typically does not adjust supply for corn and soybeans in July, but if corn conditions continue to decline at a rapid pace, there is a chance USDA could cut the July yield from May/June.
At this point we don’t think it will be revised. USDA’s first survey of spring wheat is July.

US
old-crop corn carryout was cut 150 million bushels to 1.357 billion, a tight 7.4 percent STU, due to a more than expected increase in corn for ethanol use of 75 million and upward revision to the exports by 75 million (Brazil).  We were surprised USDA lowered
the Brazil corn crop by only 3.5 million tons to 98.5 million, 1.2 million above an average trade guess.  Argentina corn was unchanged.  Back to the US corn balance, USDA made no changes to new-crop categories other than reflecting the lower carry in.  We
thought the US soybean and wheat ending stock revisions were neutral.  New crop all-wheat exports were lowered only 4 million bushels.  Beginning stocks were lowered 20 million bushels to reflect higher old crop exports (crop year ended), which was offset
by an upward revision to all-wheat production by 26 million to 1.898 billion bushels.  USDA raised feed use for 2021-22 by 10 million to 180 million, 80 million higher than 2020-21.  Wheat production by class below.

USDA
raised Brazil’s soybean production by 1 million tons.  Argentina was left unchanged.  USDA left 2020-21 US exports unchanged but unexpectedly cut the crush by 15 million bushels to 2.175 billion.  We think it will end up higher than that unless some plants
are unable to source the soybeans during the summer or crush margins erode.  For new-crop, USDA raised the crush by 15 million, which was needed given the strong demand for new-crop soybean oil for renewable diesel.  Speaking of which, USDA made no changes
to old and new crop biofuel demand, but increased food use for 2020-21 by 225 million pounds to 14.325 billion.  We agree.  Old crop SBO exports were lowered 400 million pounds. Note export sales shipments have been low recently.  Imports were lowered 50 million.
Production was lowered 135 million reflecting the lower crush.  The result lowered the carryout by 10 million pounds.  New crop soybean oil categories were unchanged other than to reflect a lower carry in.  Soybean meal production for old crop was taken down
200,000 short ton.  Imports were increased 50,000 short tons (Canada?) to 700,000 tons and domestic use taken down 150,000 tons.  With a healthy May and June crush rate, we are surprised exports were not lifted higher given the amount of meal in the pipeline.
New crop was unchanged.  The increase in US soybean stocks by 15 million initially caught the trade off guard, but prices paired losses in new-crop from higher corn.

As
we mentioned above, crop conditions and weather are back on the table.  Look for volatility in these markets to last into FH July, unless NA weather significantly improves.

·
Brazil’s second crop corn (2020/21) was reduced further on the persistent drought conditions that pushed yields below average despite recent rains. Lower yields were moderated by an increase in area.

·
Brazil’s 2020/21 cotton production was reduced, reflecting lower area due to a delayed start to planting and relatively unfavorable cotton prices at planting.

·
Favorable May weather in Europe supports prospects for higher wheat and rapeseed production.

·
Russia wheat production was raised 1.0 MMT, to a new record. 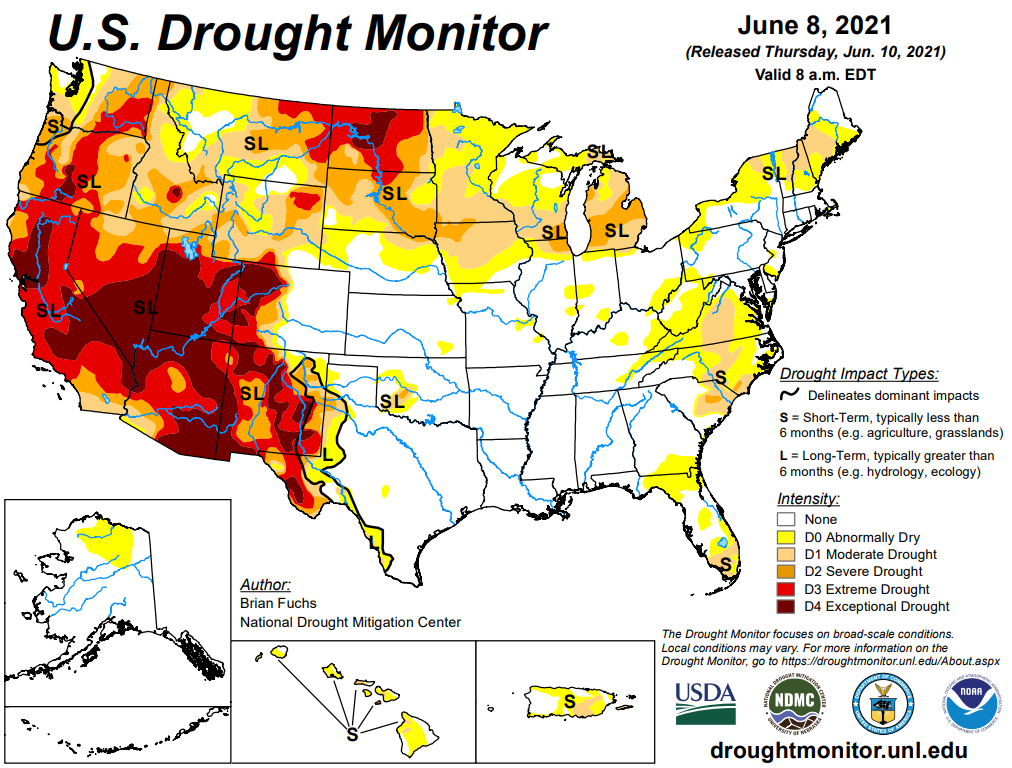 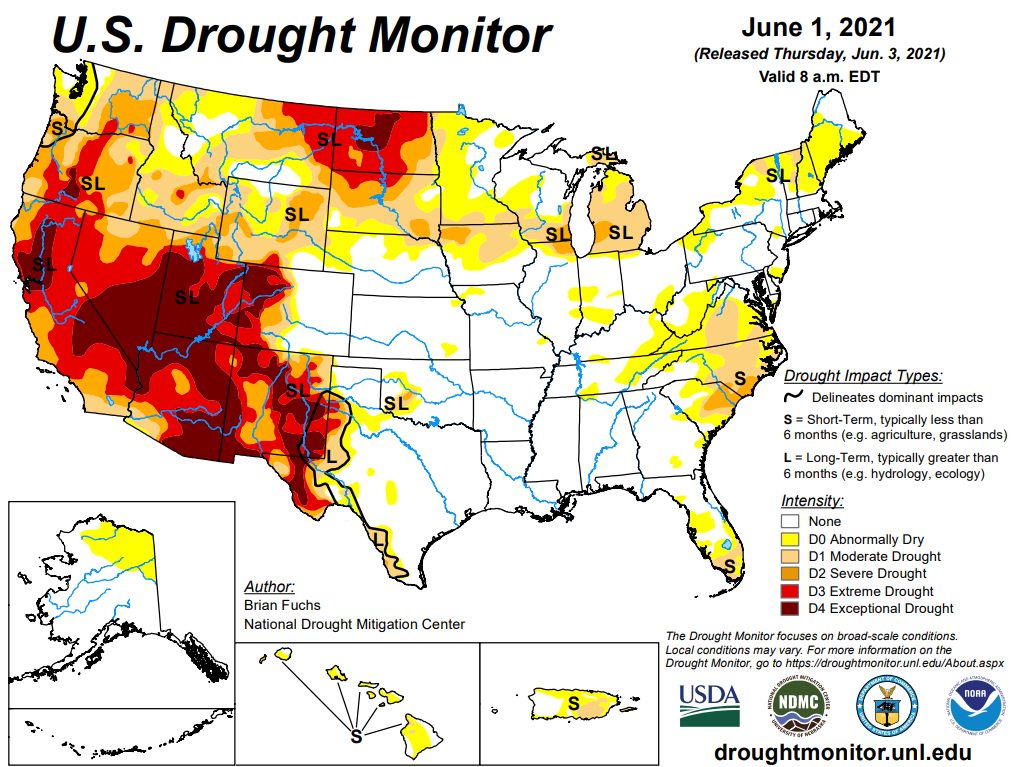 o
Scattered showers and thunderstorms are expected periodically, but resulting rainfall may have a tough time countering evaporation

o
The GFS model run has a little too much rain in the outlook and not enough heat; so, as usual there is need for a compromise in the models

o
Drying is expected this weekend through a large part of next week, despite a few sporadic showers and temperatures will be very warm to hot again during the Sunday through Tuesday or Wednesday period

o
The risk of serious flooding has been greatly reduced, but local flooding is still expected and the rain will disrupt planting of summer crops with a few of the wettest areas having need for a little replanting

o
Recent forecast models have suggested the period from June 17-21 may be a time period to watch for a tropical system in the Gulf of Mexico.

o
Some welcome rain fell Wednesday and early today from northern Shaanxi to parts of Hebei with a few areas in northern Hebei getting 1.00 to more than 2.50 inches of rain

o
Rain also fell overnight in Liaoning where another 0.60 to nearly 3.00 inches resulted

o
Southwestern areas will see a little cooler bias in temperatures and limited rain potential; these temperatures will be much closer to normal than in the northeast part of the province

o
Delta and Tennessee River Basin rainfall the past two days was greater than expected with 3.00 to 9.00 inches resulting in more widespread flooding

o
Safrinha corn and cotton production will be down this year, despite periodic rainfall in the south

o
Temperatures will be warm, but not excessively hot

o
Drying will raise the need for rain in time

o
The rain was welcome

o
Greater rain is needed in many areas, including Ghana and some west-central Ivory Coast coffee, cocoa, rice and sugarcane production areas

o
Rainfall will continue lighter than usual, but at least some showers will occur periodically 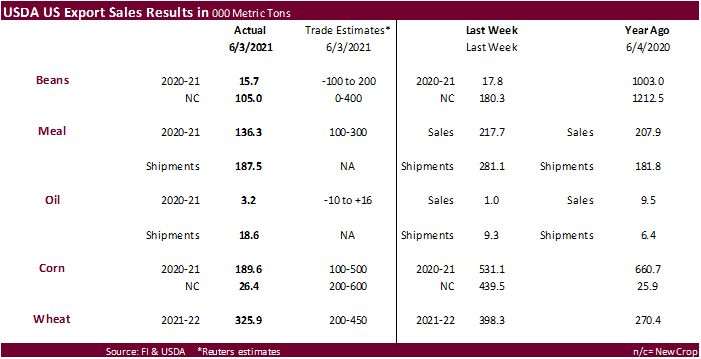 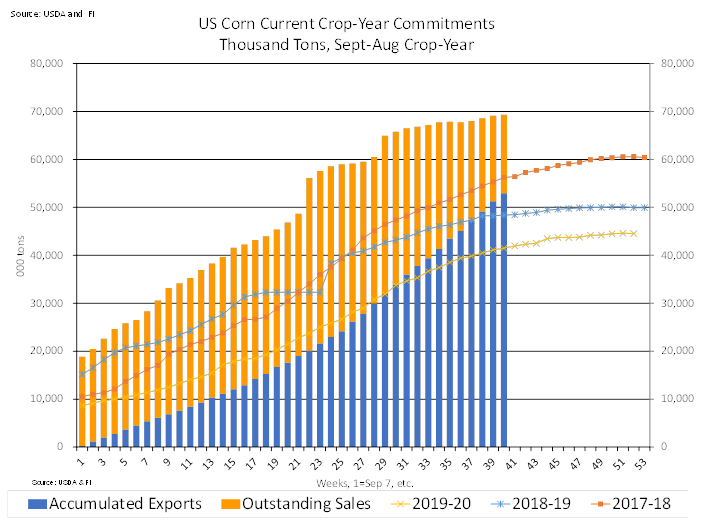 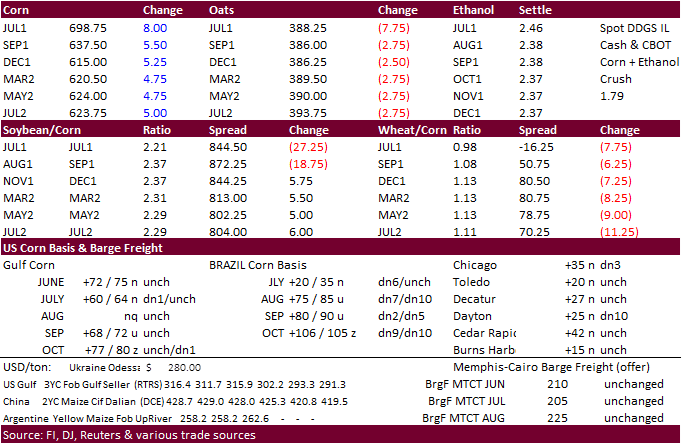