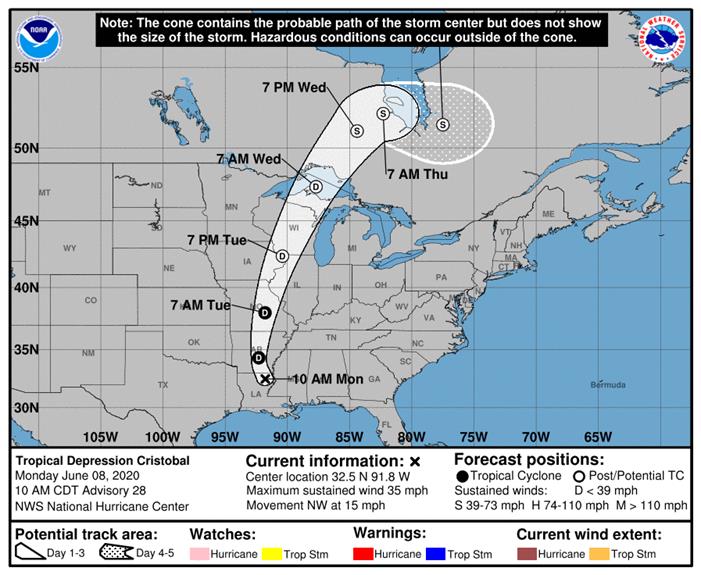 MARKET
WEATHER MENTALITY FOR CORN AND SOYBEANS:  Once remnants of Tropical Depression Cristobal leave the Corn Belt, net drying is expected for a while. Soil moisture will be favorable for good crop development in most areas, although slowly declining soil
moisture in the eastern Midwest and parts of the Tennessee River Basin will be closely monitored. Timely rain will be very important for all of these areas late this month and in July.

Weekend rainfall in Canada’s Prairies was good for “some” of its canola, but additional rain will be needed in parts of the region this week. Dryness remains in a part of the eastern Prairies and rain will have to fall more significantly soon to ensure that
the dryness does not become a greater problem.

Rain is needed in South Africa and Australia to improve canola planting conditions. Some rain is expected in Australia late this week.

Philippines rainfall has become erratic and light and needs to be bolstered in a major way. Most of Malaysia and Indonesia rainfall is still rated favorably and likely to prevail for a while.

Europe weather will remain mostly good for coarse grain and oilseed development, although some additional warming is needed in Eastern Europe. A boost in rainfall coming for Western Europe will likely translate into improving summer crop development potential,
although it may come a little late for winter rapeseed.

The bottom line will make weather a growing interest for coarse grain and oilseed development around the world, although it does not seem like there is an immediate threat to production. Just enough concern may help induce some rising market premium as time
moves along.

MARKET
WEATHER MENTALITY FOR WHEAT:  Rain
in Canada’s Prairies during the weekend helped to improve wheat conditions, although there are still some pockets that need greater rainfall. Dryness is also a concern in parts of the northern U.S. Plains. In the meantime, less rain in the eastern Midwest
will be good for soft wheat as it fills and matures over the next few weeks.

U.S. hard red winter wheat is finishing out relatively well, but dryness and frost damage in the southwestern Plains has left production low in some areas. Rain in Nebraska, parts of Kansas and a few Colorado locations today will benefit late season crop development.

Rain in Europe has improved small grain conditions in recent weeks and will continue to support crops, although some areas need temperatures to trend just a little warmer.  Spring cereals are still rated favorably with little change expected this week. There
will be some interest in eastern Russia’s spring wheat as time moves along this summer, but for now the environment is still mostly good.

Australia’s rain event expected late this week and into the weekend should improve some crops, but there will be an ongoing need for greater moisture.  South Africa and parts of Argentina still need greater rainfall to support wheat planting and establishment.

·
An increase in US crop ratings and US Midwest forecast for rain this week are prompting CBOT corn futures to take a breather after three consecutive days of higher prices.

·
Yesterday AgRural lowered its second corn production estimate to 65.3 million tons from 66.7 million tons previously, 4 million tons below 2019.  Conab is at 74.233 million for the second crop, down
from 75.913 million in May.

·
USDA reported a one-point increase for the US corn crop condition to 75 percent G/E categories, in line with trade expectations.  97 percent of the corn crop had been planted.