USDA
released their May supply and demand outlook

Reaction:
Neutral
to bearish feedgrains, at least for new crop, and neutral to friendly for soybeans.  Bottom line is if the US realizes larger soybean and corn plantings when NASS updates the area at the end of June, look for USDA to increase selected demand categories for
those US balance sheets in July.  Therefore, we expect new-crop corn and soybean prices to remain above $5 and $12, respectively, through the summer growing season, unless US crop conditions suggest yields well above trend.  Old crop prices should continue
to be underpinned on tight global stocks.

We
remain bullish the soybean complex based on strong global crush demand and China import demand.  One figure that stood out was new-crop China corn imports projected at 26 million tons, same as the current crop-year. Note the USDA Attaché put corn imports below
the current year in anticipation of a larger 2021 China corn production.

USDA’s
data dump didn’t really have any other eye-catching surprises, but there were a few notable items that caught the trade off guard.  Old and new crop US wheat ending stocks came in 26 and 44 million bushels above expectations, respectively.  Old crop US corn
ending stocks were a little tighter than expected but new-crop was reported 163 million bushels above expectations at 1.507 billion, a level that would be “comfortable.”  US soybean old and new-crop stocks were reported near expectations.

USDA
increased its US hard winter and hard spring ending stocks by 12 million bushels each, increased soft red winter by 8, and lowered white and durum stocks by 11 and 1 million, respectively.  USDA looks for new-crop feed wheat to increase 70 million bushels
to 170 million from the current crop year.  I think some of the trade was penciling in higher wheat for feed for the current marketing year due to the rise in corn prices but remember most of the wheat that is used for feed occurs during the summer quarter.
US wheat ending stocks, along with the global carryout, is seen comfortable. 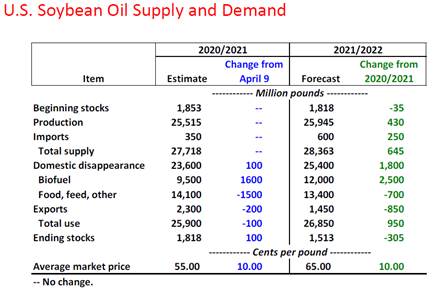 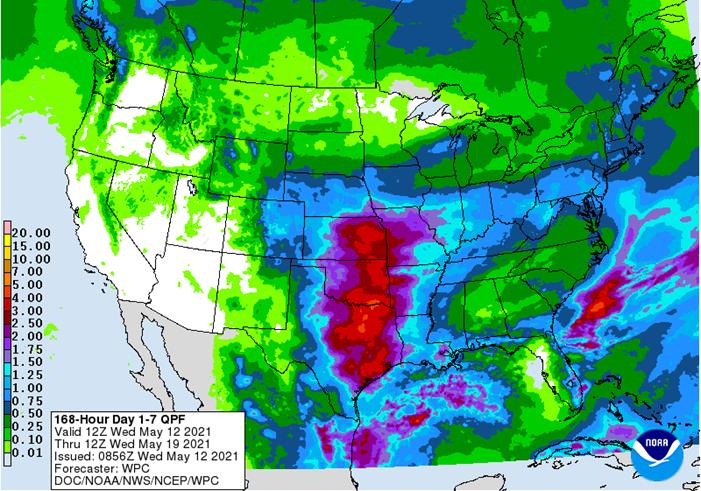 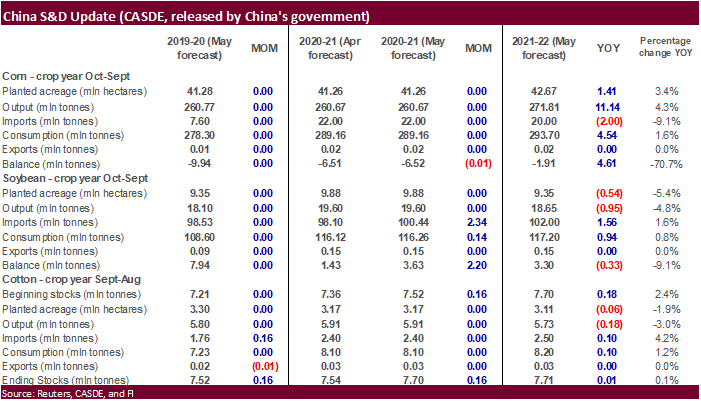 Weekly
US ethanol production rose a large 27 thousand barrels to 979,000 barrels per day, highest since November 20, 2020, and stocks decreased 1.047 million barrels to 19.393 million, lowest weekly stocks figure since December 30, 2016.  PADD1 stocks fell 487,000
barrels and PADD3 stocks dropped 346,000, an indication exports could have been robust in early May and/or a good amount of ethanol was in-transit.  Gasoline stocks increased 378,000 barrels to 236.2 million.  Gasoline demand fell from the previous week but
is up 19 percent from this time last year but off 3.8% from two year ago.  Refinery and blender net input of oxygenates fuel ethanol was 888,000 barrels, 1,000 higher than the previous week.  Ethanol blended into finished motor gasoline was running at 91.6%,
slightly above the previous week. 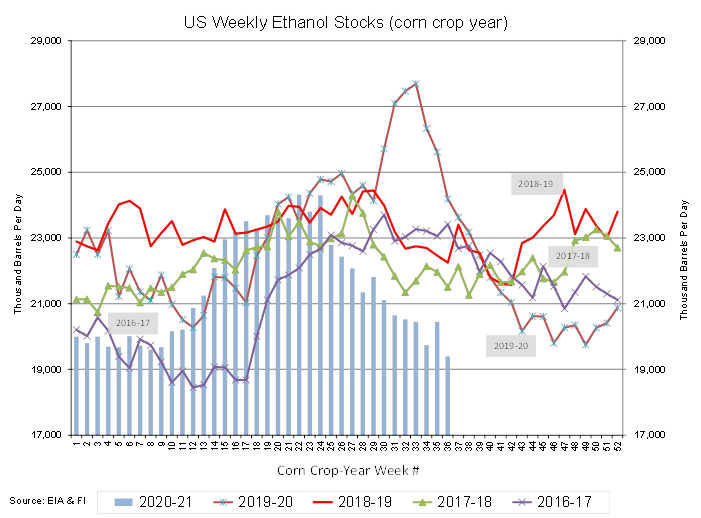 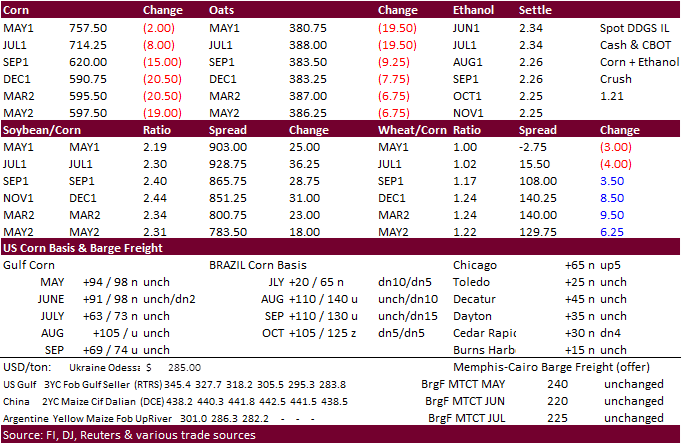 The
US needs to see a massive crop to pull new-crop futures below $4.00, which could happen for 2022 contracts if the export campaign for Q1 (SON) does not end up a record.  Keep an eye on new-crop corn commitments this summer. 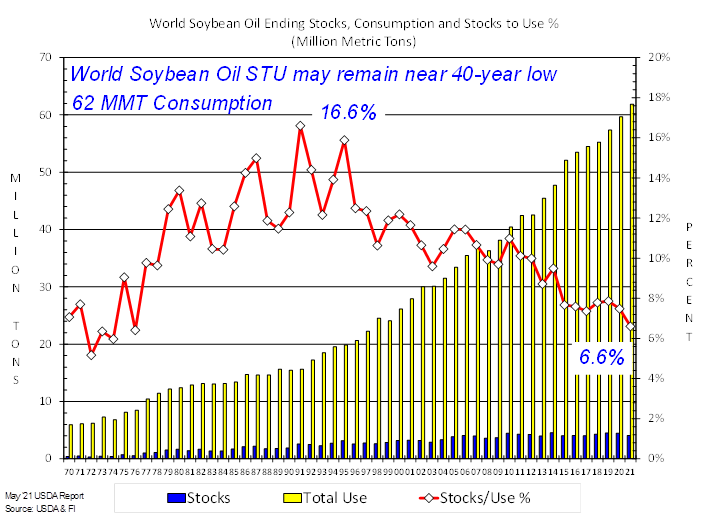 Argentina
producer selling for soybeans were 886,100 tons last week, lifting the total for the season to 17.3 million tons, according to the AgMin.  Sales are below the previous season which was running at 21.4 million tons this time last year.  The Rosario grains exchange
expects production to end up around 45 million tons, down from 50.7 million tons a year ago. 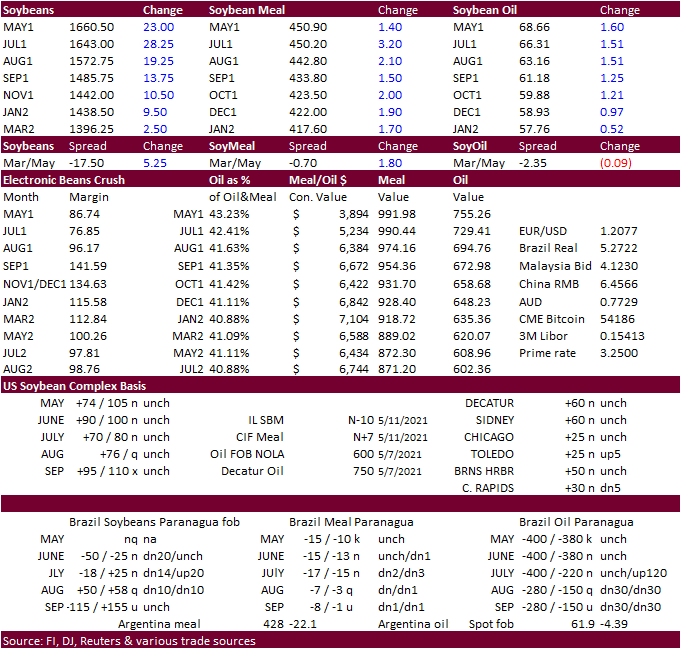 ·
South Korea’s Agro-Fisheries & Food Trade Corp seeks 134,994 tons of rice from Vietnam, China, the United States and Australia, on May 13, for arrival between September 2021 and January 2022. 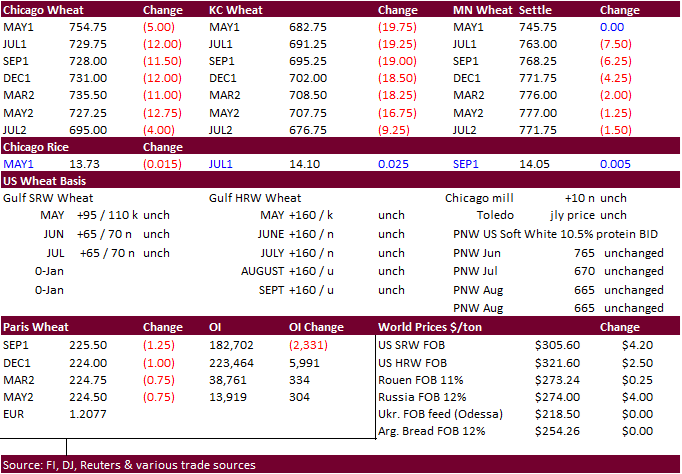