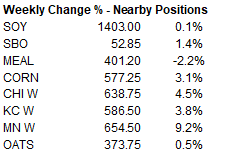 Reaction:
Neutral
to friendly feedgrains and neutral to slightly bearish soybeans.  We tightened up our trading range for May soybeans & corn and raised our trading ranges for all three US wheat contracts.

CBOT
soybeans trended lower post USDA report and wheat trimmed gains.  CBOT corn sold off post USDA report which created a buying opportunity for some longs.  Prices dipped as USDA made a less than expected upward adjustment to US exports by only 75 million bushels
(trade was looking for 100-to-200-million-bushel increase). USDA’s outlook on 2020-21 corn exports indicated we could see some current crop year corn commitments rolled into new-crop at the end of the marketing season, or USDA acknowledging actual corn shipments
need to increase in order to convince the government US corn exports could reach commitment potential.  US corn stocks dropped a more than expected 150 million bushels.  Corn for feed was upward revised 50 and food use was down 25.  They lifted corn for ethanol
by 25 million bushels, a surprise in our opinion.  Corn exports were taken up only 75 as we mentioned.  World corn stocks were lowered 3.8 million tons to 283.9 million, 19.1 million tons below 2019-20.  Argentina corn production was lowered 0.5 million tons
to 47 million. Brazil was left unchanged at 109 million tons.

US
soybean stocks were unchanged but USDA did tinker with demand, by taking exports up 30 million bushels, offset by 10 million bushels lower crush, 2-million-bushel lower seed and 17 million downward revision in residual.  US soybean oil food was up 400 million
pounds, and biodiesel use lowered 400 million.  This could be a glimpse of what USDA is thinking for soybean oil for renewable biodiesel use.  Next month USDA will add biofuel use, replacing soybean oil for biodiesel use.  USDA made a bearish move by raising
Brazil exports by 1 million tons to 86 million tons of soybeans for 2020-21.  Brazil soybean production was taken up 2 million tons to 136 million while Argentina was left unchanged at 47.5 million tons. 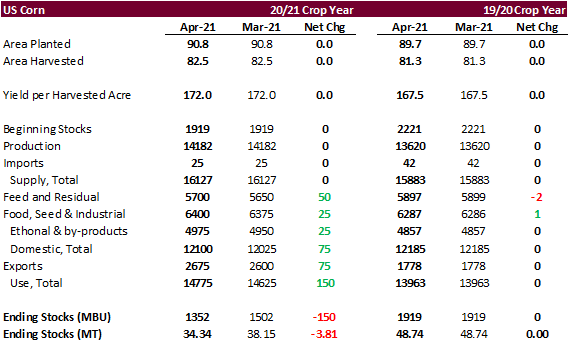 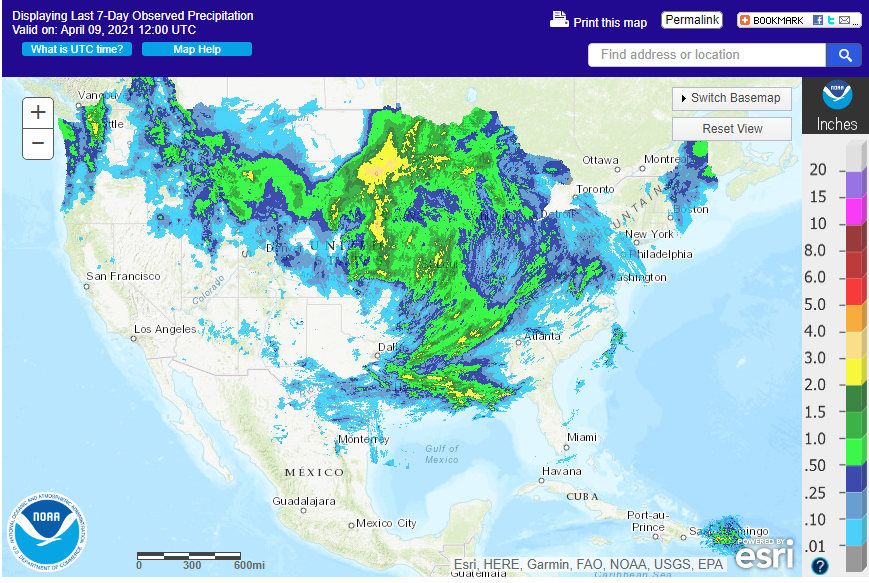