·         The Midwest will be wet Thursday into mid-next week, bias WCB. The rain will delay harvesting efforts and raise concerns over quality for corn and soybeans. There will be an important period of drier weather October 10-15, which will be needed for producers.

·         This week the Delta will be on the drier side. Showers will fall in the lower Midwest and Tennessee River Basin. Overall fieldwork activity across the Delta should improve.

·         Rain will fall from the southwestern desert areas through the northern Plains early to mid-week this week.

·         Brazil will see rain in the central and southern growing areas (MG, MGDS, Goias, Parana) this week while Argentina will be dry through Saturday.

from Ks. to north Mo.

to far south Wi. with

·         We are hearing, but did not confirm, some central IL soybean growers are using bags to store soybeans, like to what you can find in Argentina.

·         US producer selling was slow today and some processors raised basis levels. 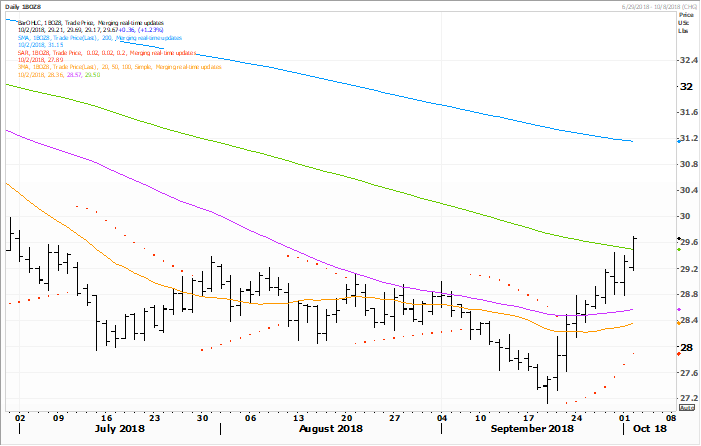 ·         US wheat futures rallied after a report surfaced that Russia could curb wheat exports.

·         Russia’s agriculture quality control government arm (Rosselkhoznadzor) reported the possible temporary suspension of 30 grain loading points in two of Russia’s top grain exporting regions of Krasnodar and Rostov over violation of phytosanitary rules. The suspension could last up to 90 days. After newswires dug into the issue, it was not clear how many points could or will be suspended.

·         Any such suspension will not change our outlook for the Russian wheat export projection for the 2018-19 crop year of 36 million tons (1 MMT higher than USDA) as Russia will still have the opportunity to export wheat on the back end of the marketing year. See our attached Russia wheat S&D.

·         This comes after Algeria may soon buy Russian wheat, which would be a monumental shift from traditional supplier Europe.